This week I saw an ad for a hike to Deer Mountain sponsored by the Ketchikan Recreaction Center. I signed us up, and we went to the trailhead to meet the group at 10:00 this morning. We were excited about going up one of the mountains in Ketchikan with a group so we didn't have to worry about bears.

Speaking again of bears - people here regard them as a usual occurance. It's just no big deal. I'm still wary and squeamish of them because I haven't had a bear encounter. Maybe after I do, I'll be more matter-of-fact. But until then, I'm sticking to groups! (In fact, we met one of our neighbors the other night and he asked if we had seen the bear walking down the road last night... We're not in our house yet, so we hadn't - but once we are, you can be sure I'll have my eye out for such a sight.)

We ended up hiking to the first summit which took about 90 minutes and went up about 1200 ft. The morning was misty and chilly - in the 50's - so we wore raincoats. Even though it didn't rain, there was an intermittent occasional drizzle once we got up high because of the mist. The path was lined with palm-sized stones, boardwalk and staircases. Staircases are a fact of life in Ketchikan as some of the streets are actually staircases because of their position on the cliffs. (In fact, I passed a street today in town that was steps - no pavement at all!)

The whole hike took about 2 1/2 hours - just long enough. No bears and not summit view because of the mist, but the view along the trail was awesome.
Posted by Live from Ohio at 8:34 PM 2 comments:

The locals say that there was only 3 days of sun in July! And so far in August, there has been nothing but sun. The weather has been just gorgeous - no clouds and in the 60's. The sun is much warmer than that, but in the shade it's cool and lovely.

Gates and I explored the other end of the island yesterday and also spent some time at Rotary Beach. The water is crystal clear with mountains in the distance. Rocks and driftwood dot the beach, and salmon berry bushes (which you can eat) grow all along the shoreline.

A different sound that's in the air - the mosquito whine of the many, many float planes that are taking tourists on tours. Standing by the dock this afternoon, I tried to get a photo of one coming in for a landing. In the several minutes I tried to capture it, four to five planes came in for a landing. It's fun to see them take off and land in the middle of the channel.
Posted by Live from Ohio at 4:58 PM 3 comments:

Another sunny day in Ketchikan! YAY! Did we bring the sun???

After church, we set off for Ward Lake. We hiked the Nature Trail which winds around the lake. There were beautiful views as well as interpretive signs to give us information about the Tongass National Forest. It was incredibly gorgeous!

After driving more than 4500 miles, we've arrived! We got into Ketchikan yesterday at 1:30. We were in the dining room of the cafeteria on the ferry when I noticed we were approaching a town. I asked someone which town it was, and they said Ketchikan! I thought it would be another hour before we docked - but it was really less than 30 minutes. We had a great chance to see numerous eagles roosting high in the pine trees as we maneuvered towards the pier. Referring to the white heads of the bald eagles, one woman said, "Look for the golf balls in the trees." Sure enough, we saw lots of golf balls! We also saw a young eagle which did not have the white head. Instead, it looked a lot like an osprey or hawk with its brown speckled feathers. I guess people get used to seeing them, but I can't imagine not feeling WOW - there's a bald eagle...

Ketchikan gets a lot of rain, but we arrived in the sun. Today was also sunny - yay! We're staying at a hotel near the water because they are painting the house we're renting. It's nice to have a chance to make calls and set up services like the phone, TV and Internet before our household goods are delivered.

Tomorrow is a blueberry festival in town. We plan to get on our bikes and explore.

Many, many thanks to all of you who followed us with your thoughts, prayers and notes as we traveled. I really felt your presence. It meant so much to have your company.

The alarm jangled us awake this morning at 4:00 AM so we could be at the ferry terminal by 5:00. It was still dark and cloudy when we got in line for the ferry. First they measured the van and then we went into the terminal to get our tickets. Back in the van, we got in another line to go through customs. Then we sat and waited and waited. Soon the cars and trucks came off the ferry, and they loaded on the tractor-trailer trailers one by one. Soon it was our turn to drive on. We were directed to take whatever we needed out of the van because once the ferry is underway, we could not access our car unescorted. To prevent this, the doors to the auto area have keys pads near the handles.

The ferry is a similar size to the Cape May-Lewes ferry we used to take to DC, except that it’s also like a cruise ship in that there are cabins, a small theater, a cafeteria (some ferries have dining rooms), a bar and a gift shop. Several seated viewing areas are on different decks. There are regular seats and reclining seats as well as tables and chairs.

I can say that the coffee and scones are delicious! Ironically, the scones were the same ones we had in Jasper at the hotel’s breakfast buffet. (And we thought they made them specially there...)

After a rainy and chilly day yesterday, the sun is shining and it is a little warmer. The views are absolutely incredible. I just want to keep taking pictures of the clouds and mountains above the water.

We have a four berth cabin which is about the size of a hotel room. There are two bottom bunks and two upper ones, a table and two chairs. The bathroom also has a shower. There are only a few four-berth cabins, so ours is in the front of the ferry with an expansive forward view out two large windows. The thick shades fold down for napping or can be secured up with a strap that snaps.

Tonight we’ll be in another hotel in Ketchikan. The original plan was to go directly to the house we’re renting, but it’s being painted, so we’ll probably spend 2-3 nights in a hotel. Still, it will be wonderful to be in the town that will soon be home. Tomorrow when Robert starts work, I hope he can find out when our household goods can be delivered. It won’t truly be home until we’re surrounded by our stuff...
Posted by Live from Ohio at 12:17 PM No comments:

We just had breakfast and we're about to set out to see the North Pacific Historic Fishing Village in Port Edward. The cannery village is a national historic site.

The weather is cloudy and rainy - getting us ready for Ketchikan. More later...

We 're back from the fishing village which was very interesting. It's actually a salmon cannery that has been preserved exactly as it was before it was abandoned in the 1960's. Many different people worked on the nets and in the processing plant. The net workers were very important because the nets were expensive and so vital to salmon fishing. The "net boss" was a person of high stature since he was in charge of the nets.

In the theater, there was a short play in which a woman played the parts of many different characters involved in the history of the cannery. In Ketchikan there is a salmon cannery, but it is not open to the public for tours. This village gave us some nice preparation for AK.

And so did the weather - rain, rain and more rain. And chilly - the temperature is only 52. I had on a t-shirt, sweatshirt, fleece and a rain jacket. Brrrr.

Tomorrow we'll get up at 4:00 AM in order to be in the Alaska Marine Ferry line by 5:15 - three hours before the ferry leaves at 8:15. The trip will take 8 hours, including the extra hour we get when we pass from Pacific Time to Alaska Time. Fortunately, we have a cabin in case we need a nap!
Posted by Live from Ohio at 9:39 AM No comments:

This morning, the mountains were visible behind the bed and breakfast. Mist still clung to the peaks, but we were able to see the glaciers.

At the suggestion of one of the B&B owners, we stopped at Moricetown, just out of Smithers. Native Americans, also known as the First Nation, fish for salmon there. The Bulkley River is especially fierce. The fishermen attach themselves to the ledge or pier with a strong cable in case they slip. Over and over again, they plunge a long-poled net into the water. At first we thought they weren’t going to be successful. Then one fisherman held up his net in triumph - he had caught a king salmon! The audience applauded their approval. I was surprised that I couldn’t see any salmon in the water. Gates and I had visited a salmon run in Brewster while we lived on the Cape. The salmon were so plentiful, you could have scooped out a dozen. The air was filled with the squawking of gulls as they tried to get dinner. Here, the Bulkley River was much, much quieter.

About five miles back we saw a small brown bear feeding by the side of the road. I have to say, we’ve gotten all kinds of information about how to be safe around bears. Much of it is conflicting. Also there are different techniques for black and brown (grizzlies) bears. But the latest information we received sounded the most logical - don’t use bear bells and here’s why: the bears are so acclimated to humans that the sound of bear bells is like a dinner bell - it means humans (and maybe food...) are nearby. I was ready to buy some or carry a string of jingle bells in AK when we go hiking. My new technique will be to hike in groups, clap my hands and carry a stout stick.

Now we’re driving along the Skeena River, about 50 miles from Prince Rupert, our stop for the night. There are many fisherman fishing. We smelled smoke and saw that there were fires along the river bank. Maybe the fishermen are cooking up the fish right there instead of waiting. Or maybe they’re smoking the fish to preserve them? We’re on the look-out for sea lions which are supposed to be jumping out of the water.

This area is foggy and rainy - a good preparation for the rain of Ketchikan. I am excited about boarding the ferry, about stepping off into Alaska and about seeing our home for the first time.
Posted by Live from Ohio at 4:15 PM No comments: 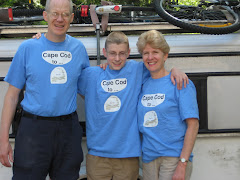 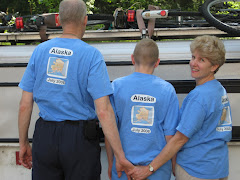 Hide and Seek anyone? 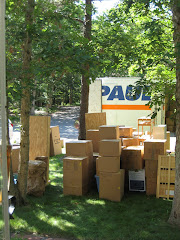 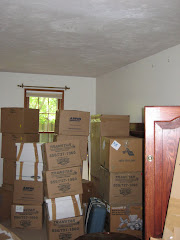 Once this was a kitchen 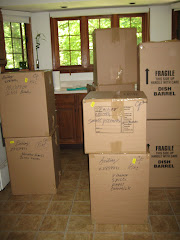 2 trucks today... How many tomorrow? 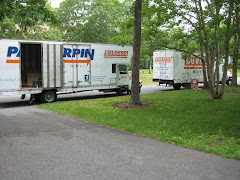 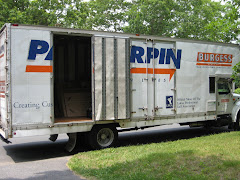 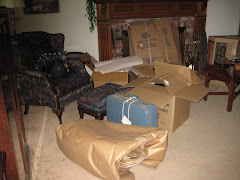 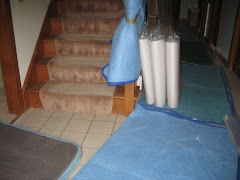 What is your favorite ice cream flavor?